The promise of cloud gaming is a promise to democratize gaming. Anyone who loves games should be able to enjoy them and share the experience with their friends, no matter where they’re located, and even if they don’t have the latest, most expensive gaming hardware. Facebook launched its cloud gaming platform in 2020 to give anyone on Facebook instant access to native Android and Windows games across every screen and web browser.
Creating the unprecedented access offered by cloud gaming required engineers at Meta to rise to new challenges and develop a growing hardware infrastructure capable of delivering quality game experiences to people all over the world.
But gaming itself is also evolving. From new 3D experiences like AR and VR to what will eventually become the metaverse, people all over the world want to play increasingly immersive games as seamlessly and easily as possible. While it will take a massive effort across the industry to bring the metaverse to fruition, we believe creating the infrastructure and solving the challenges of cloud gaming are pointing us toward solutions for the metaverse as well.
Cloud gaming is about accessibility — bringing gaming to people regardless of the device they’re using or where they’re located in the world. Placing game apps on the cloud frees people up from having to purchase new hardware and also removes the need for large downloads or waiting for updates. It enables seamless cross-play across desktop and mobile devices as well as flexible app distribution.
Cloud gaming also promises an easier developer experience since developers shouldn’t need to concern themselves as much with optimizing games for multiple hardware platforms (e.g., desktop and mobile). In an ideal world, developers will only need to build an app once and it can be distributed to multiple devices without the need for multiple binaries. And for players and developers concerned with security and integrity, cloud gaming means fewer concerns about cheating and piracy.
Enabling cloud gaming at Meta meant developing a new hardware and software infrastructure to address the challenges inherent in cloud gaming. Cloud-based games need low end-to-end latency to provide a fast and smooth gameplay experience where quality video and audio have to be streamed with as little jitter as possible. The infrastructure also needs to be capable of running multiple games on a single cloud gaming server to be economically efficient. And all this has to be secured against various cyberattacks while also remaining robust and efficient.
The best way for our cloud gaming infrastructure to provide great latency for players is to bring it as close to them as possible in terms of network distance. Meta’s data centers alone cannot provide the level of ultra-low latency we require for cloud gaming. So we rely on edge computing, where we bring the cloud gaming infrastructure closer to players by deploying in edges that are in metropolitan areas close to large populations.
Our goal within each edge computing site is to have a unified hosting environment to make sure we can run as many games as possible as smoothly as possible. Today’s games are designed for GPUs, so we partnered with NVIDIA to build a hosting environment on top of NVIDIA Ampere architecture-based GPUs. As games continue to become more graphically intensive and complex, GPUs will provide us with the high fidelity and low latency we need for loading, running, and streaming games.
To run games themselves, we use Twine, our cluster management system, on top of our edge computing operating system. We build orchestration services to manage the streaming signals and use Twine to coordinate the game servers on edge.
We built and used container technologies for both Windows and Android games. We have different hosting solutions for Windows and Android games, and the Windows hosting solution comes with the integration with PlayGiga. We’ve built a consolidated orchestration system to manage and run the games for both operating systems. This means we can deliver games and manage capacity with more flexibility across different platforms. 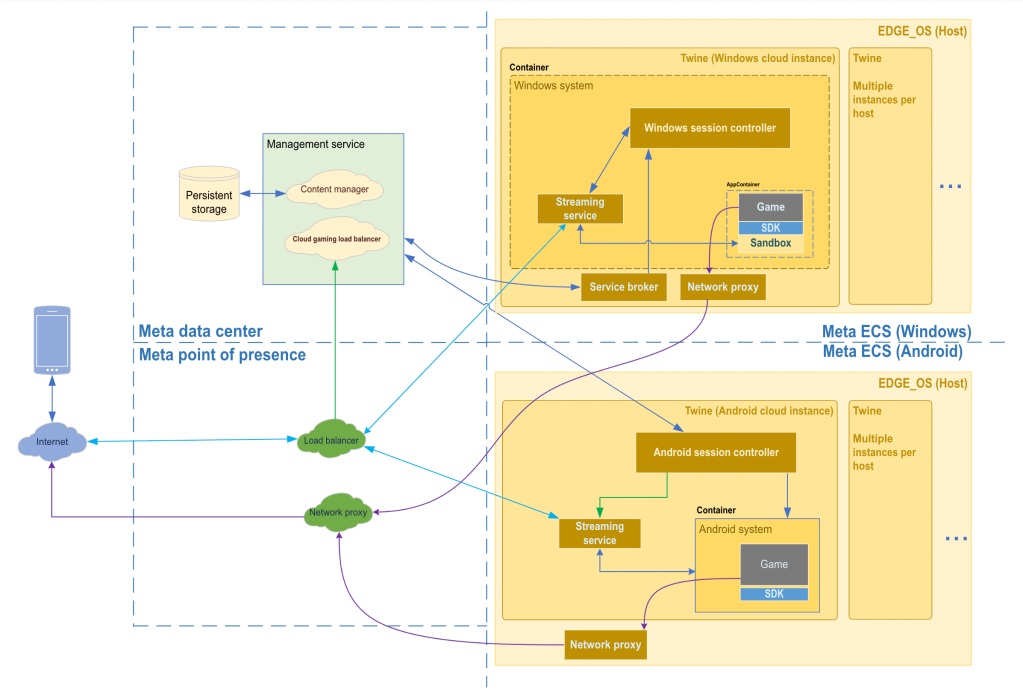